The Owl and the Leg 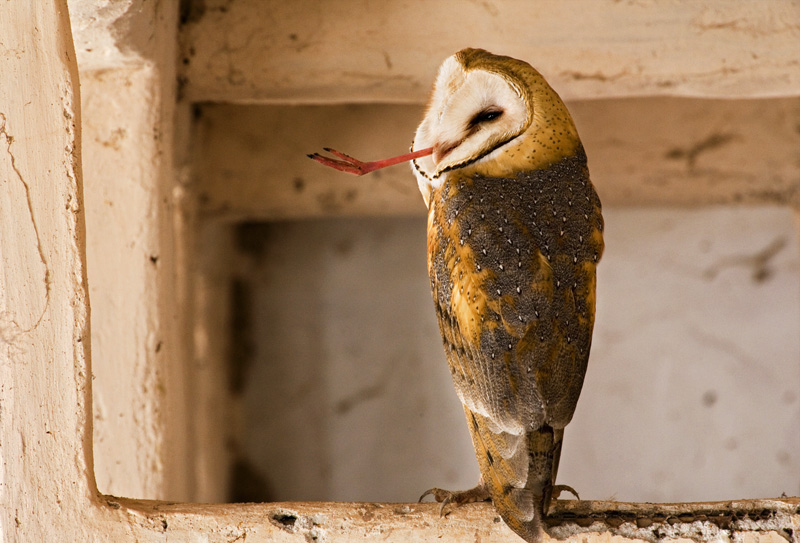 I know this shot looks strange, but it’s not a fancy Photoshop trick.  I took this image several years ago while traveling around the southern portion of the Salton Sea.  It was the middle of summer and the desert heat was well past 100 degrees.  Besides baking in my car, I had spent most of the day scouting out sunset spots and looking for burrowing owl nests (something common along the irrigation roads).

It was by chance that I stopped to eat lunch alongside a few abandoned buildings that looked to be sinking into the earth.  In fact most of the Salton Sea has this decrepit look, as if years before an early optimism had evaporated under the scorching sun,  leaving a jumble of structural decay behind.  One such building caught my eye because in front of it was a small spring of muddy water with a few blacked necked stilts walking along its edge.

As I approached the small abandoned hut I heard a strange sound and almost lost my head as a large barn owl burst through the window.  Inside I found hundreds of small bones, wings, and legs of different birds.  I was sure that I blew my chance, but I slowly and more quietly carried my tripod and gear to the other side of the structure.  I held my breath as I peaked into the next window, and was shocked to see this bizarre scene of a sleeping owl with a leg dangling from its beak.

I mostly shoot landscapes, but this owl had me scurrying back to the car for my telephoto lens, the whole time pleading to the photography gods that the bird stayed asleep.  It did, and I was able to silently setup my tripod and carefully snap away into the dimly lit room.  After about ten shots (most which turned out to be soft from the blowing wind and camera shake) I managed this image.  Seconds later the annoyed barn owl disappeared out a side window.  We both had a nice lunch time treat.

This entry was posted in Backstory.