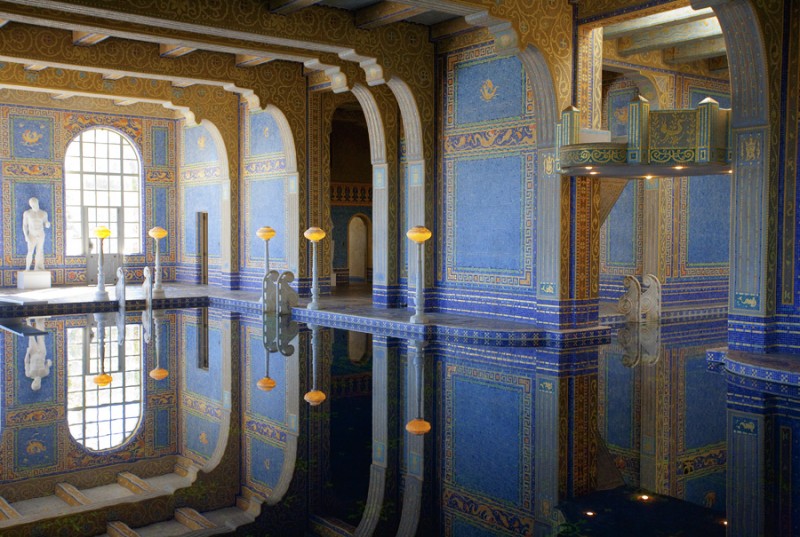 I will admit that while nature photography is my first love, occasionally I am struck by just how beautiful the creations of the human mind can be.  Hearst Castle located along the California coast is one such spot that amazed me with it’s dazzling display of wealth and history.  If there ever was a place built with the underlying theme of “because I can” this is it.

I took this photograph several years ago after taking a trip to the rugged coastline of Big Sur.  The Hearst Castle was tucked back from the coast and the winding Highway 1, a monument to wealth quietly overlooking the Pacific.  When I arrived at the palatial estate I picked one of the many guided tours (something I recommend).  The tour covered just a part of the estate’s large selection of art, furniture, and architecture.  The history of the place is also fascinating and I learned that William Randolph Hearst, the newspaper giant, apparently kept adding and building on the estate for almost 30 years, and at one point had his own zoo.

This photograph in particular is probably my favorite of the bunch.  During the tour you’re allowed to shoot photos, only without a tripod or flash, making the dim indoor shooting particularly challenging.  This image however was one of the last stops on the tour and luckily the large windows in the back provided better lighting.  I took this photo because the glassy water cast an almost surreal reflection.  This reflection, combined with the rich colors and textures, was one of the few images that I thought captured the wealth and magic of Hearst Castle.  At times it can be difficult shooting, but this opulent estate is well worth the trip.

*On a side note, if obscene wealth depressingly reminds you of your own credit card debt, there is a beach full of bellowing elephant seals right up the road.  They know how to have fun with nothing more than a beach and a few (sleeping, grunting, burping) friends.

This entry was posted in Backstory.