Finally some people actually surfing (I don’t usually shoot surfers so bear with me). 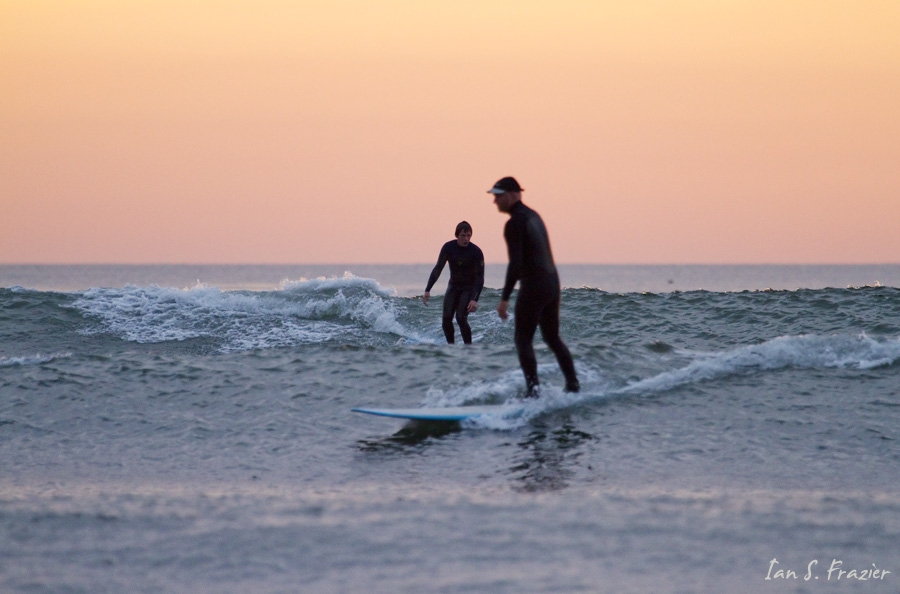 Two surfers (back in focus) 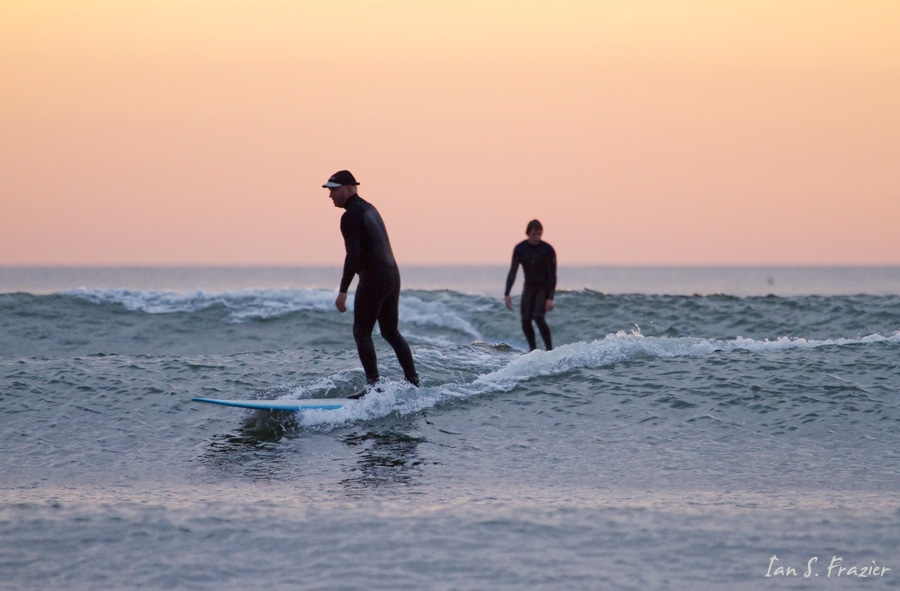 Here is an example of something I couldn’t do with the Canon 5D. I was tracking the distant surfer when another one came in from the right. I waited til the new surfer was in the right spot and then tapped the Canon 7D’s rear Af-on button to re-lock onto the nearer surfer, following him out of the frame. Even in the low light I was surprised how quickly the 7D focused. 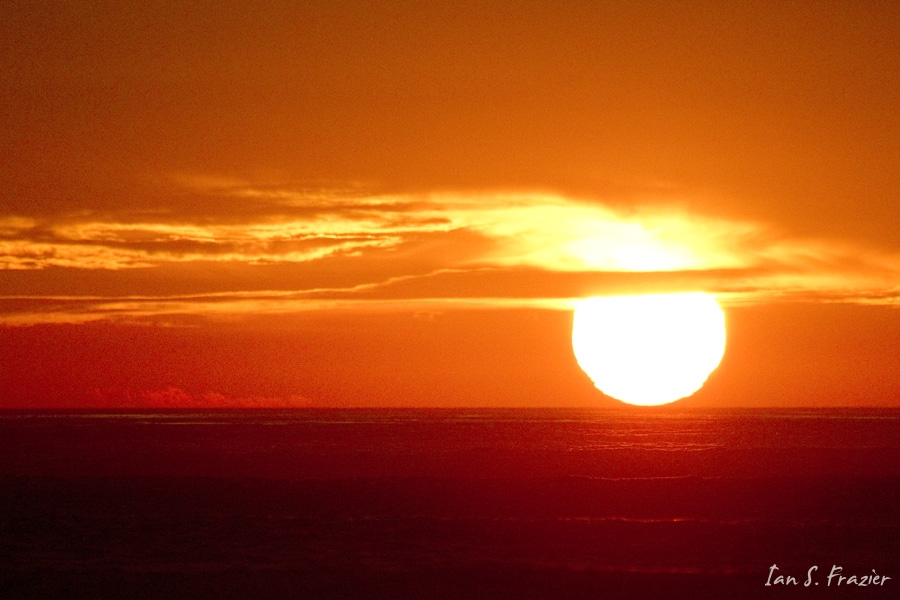 As you can see, by now the sun was hovering over the horizon and had finally popped free of the cloud cover. I find that usually in these conditions you can get some great colors well after sunset, so I kept shooting (luckily). 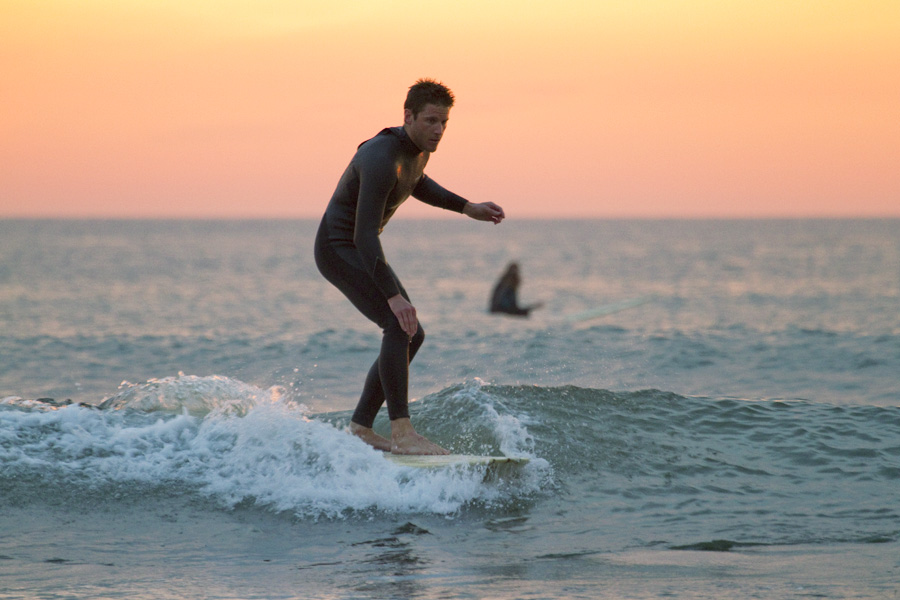 Surfer standing on board

I mostly shoot landscapes, but the 7D did a good job of keeping focus. Most of these later images were shot at iso 1600. At this high an iso there was some loss of detail (especially in shadowed areas) but overall the images still look very nice. 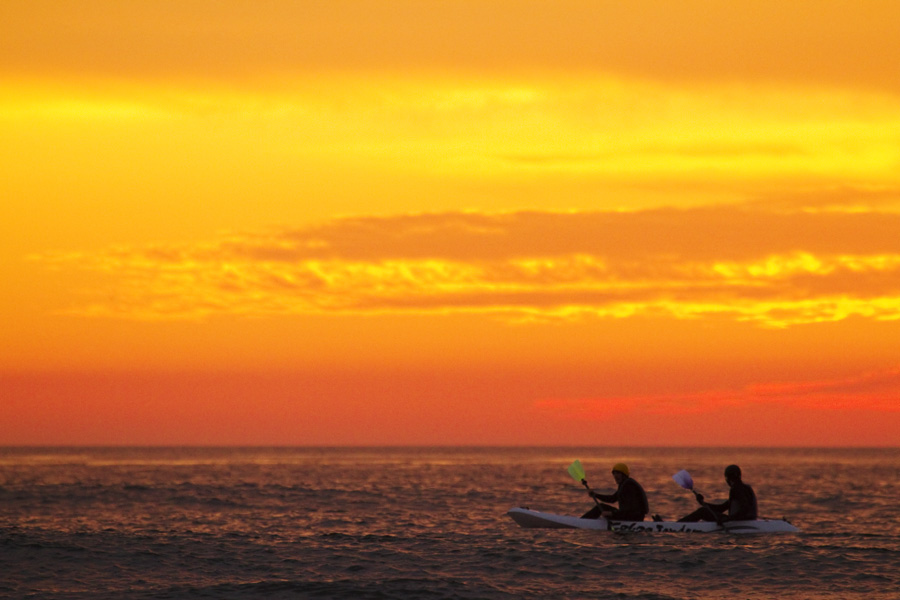 By now the sun had finally set and the sky took on an amazing orange glow. Here are the familiar kayakers peacefully rowing…. 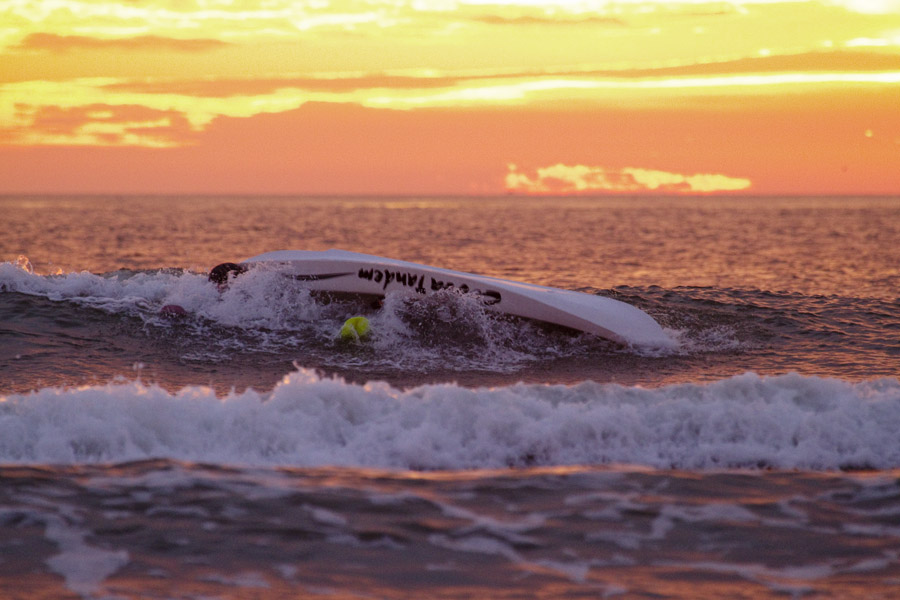 and here they are thirty seconds later. Unfortunately by now the sky was almost too intense so exposure became a tricky balancing act. 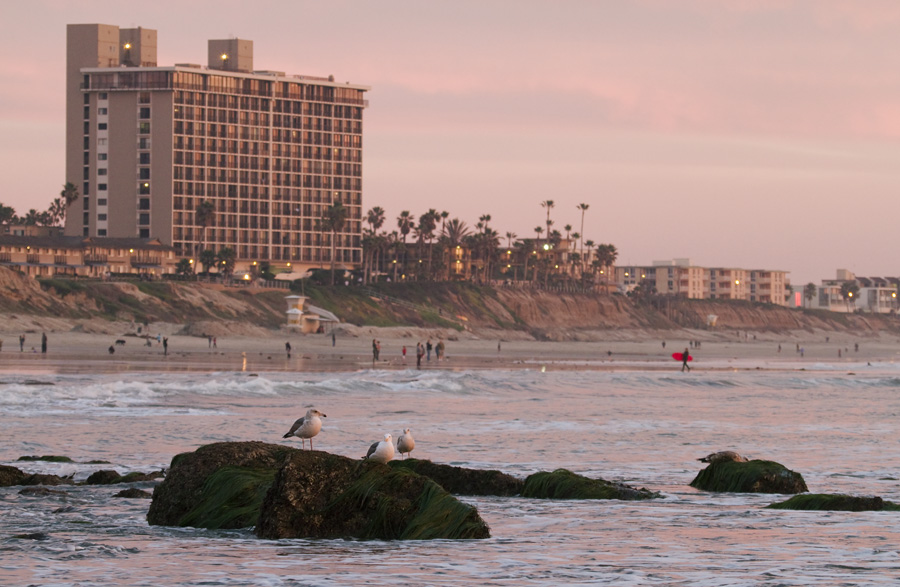 View of seagulls and Pacific Beach

I turned away from the sky and instead to a few shots of the beach and coastline. The late evening light made the air seem to glow. 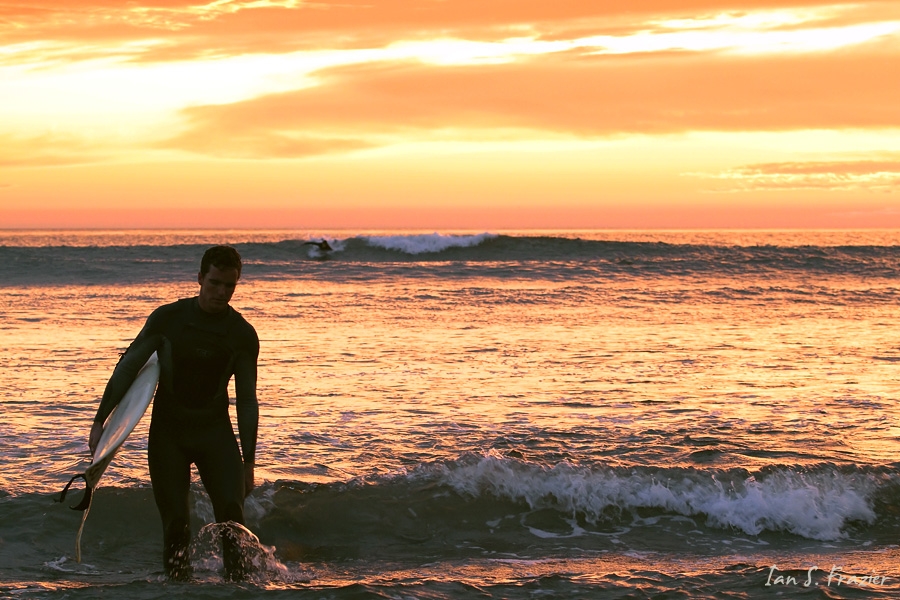 This was at the height of the sunsets color, well after the actually sun had dipped below the horizon. The sky and reflecting water seemed almost surreal. If I hadn’t been there I probably wouldn’t believe it. 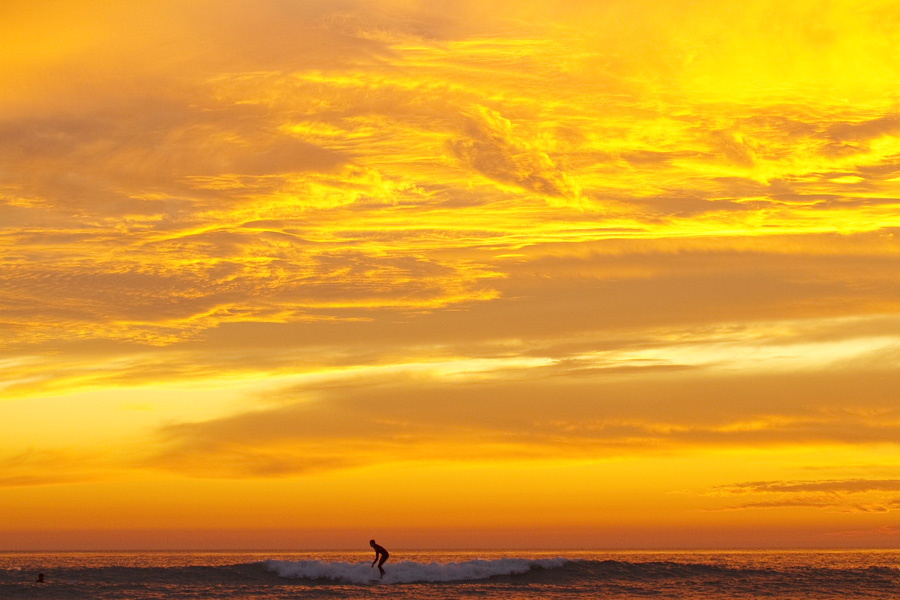 I zoomed out to show more of the sky and how the different layers of clouds lit up like they were on fire. I thought the surfer was a nice touch. 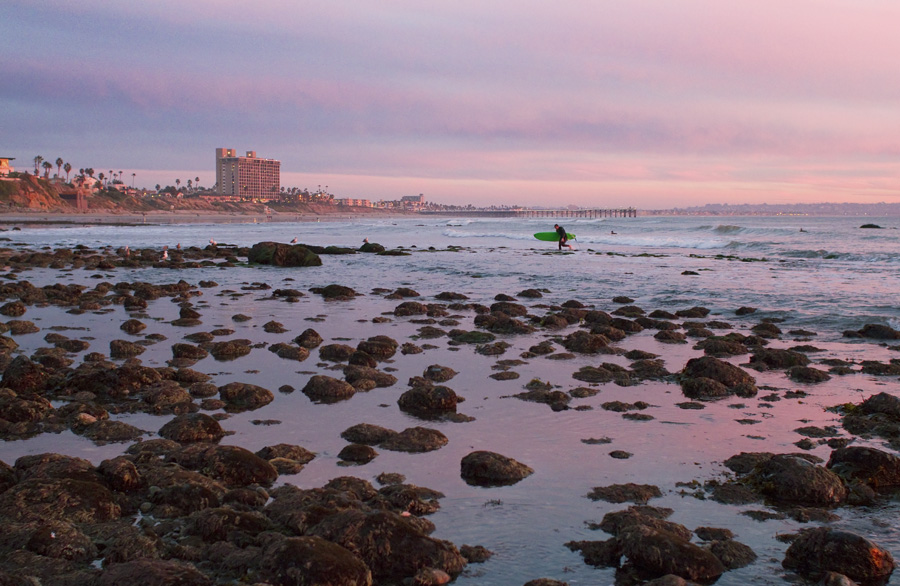 By this point the sunset had finally started to fade into a purplish gray. The pastel colors once again return, giving a nice softer light. 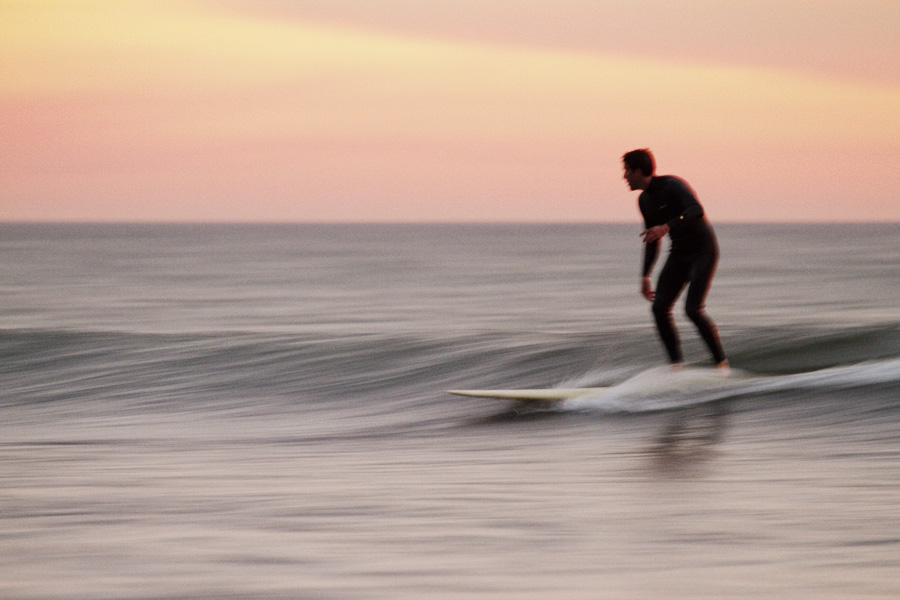 This was the last image I shot. A mellow slow shutter pan of a surfer finishing off the day.

Happy new years everyone, hope you get what you wish for.