Every nature photographer has had days where things just don’t seem to work.  The light is wrong, the sunset never comes, it’s too windy, or you’re out of inspiration.  Whatever the problem is, these difficult days usually lead to mediocre images that make you wonder why you picked up a camera in the first place.

It is especially easy to fall victim to these ruts when you already know your way around a camera and your photography habits have begun to solidify.  Beginning photographers, on the other hand, also face the same tough conditions, they just don’t care.  Every chance to shoot, no matter what the weather or conditions, is seen as a chance to experiment and learn about the photographic process.  Starting out, I too spent hours walking around my backyard shooting everything I could find.  It is almost embarrassing to admit how many cat photos I have.  The point is, I didn’t try to make every image a masterpiece, I just wanted to shoot.  Sometimes as our skill develops we forget that feeling, getting frustrated when things don’t work like we planned.

A few years ago I tried to shoot the amazing poppy fields of central California.  I researched the best place (Antelope Valley) and the best time to go.  The flowers start to bloom over the course of a few weeks, with only a few peak days each year (assuming there is enough rain).  Impatiently, I watched internet sites, read reports, and tried to pick the moment when the bloom was at its best.  Finally it was.  I packed my gear and drove throughout the night.  Finally, as the sun began to rise I arrived at the field.  I stepped from my car, and was buffeted by a cold whipping wind.  The delicate flowers were closed, and I was very frustrated.  What should have a perfect day of shooting became one of frustration.

Days like that will always happen.  Now, however, I realize that with a little experimentation they don’t all need to be unproductive.  Here are a few examples of making something out of nothing.  The key is to remember that any day you can pick up a camera to shoot; it’s a good one.

I shot this photograph well after the sun had gone down in Joshua Tree National Park.  Originally, I had gone to the park to photograph some of the interesting rock formations during sunset.  Unfortunately, an heavy traffic and an accident derailed my plans.  I arrived at the park just as the sun dipped below the horizon, but instead of heading home I pulled a heavy-duty flashlight from my car and began experimenting. 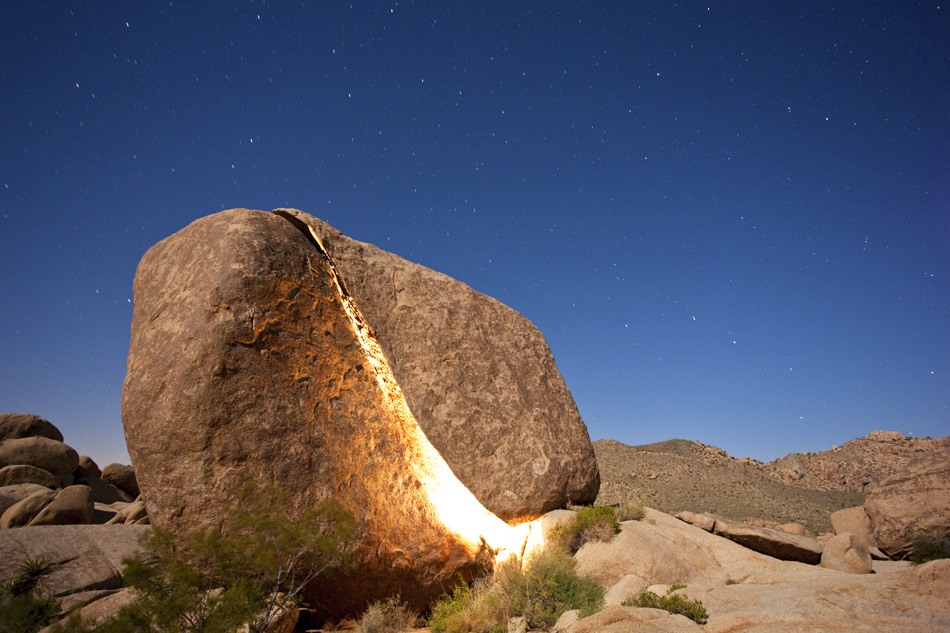 This image of Split Rock is one of my favorite from that night.  The yellow glow was from a lantern wedged into the boulder’s base.  It took a lot of experimenting to get the right exposure and composition, but the end result was worth it.  It is a photograph I probably wouldn’t have taken if things had gone as planned.

That disastrous flower trip I already talked about… well it did let me take some abstract flower images.  Here is one where I used the wind and a slow shutter speed to get a photograph of how it “felt” to be standing in a field of blowing poppies. 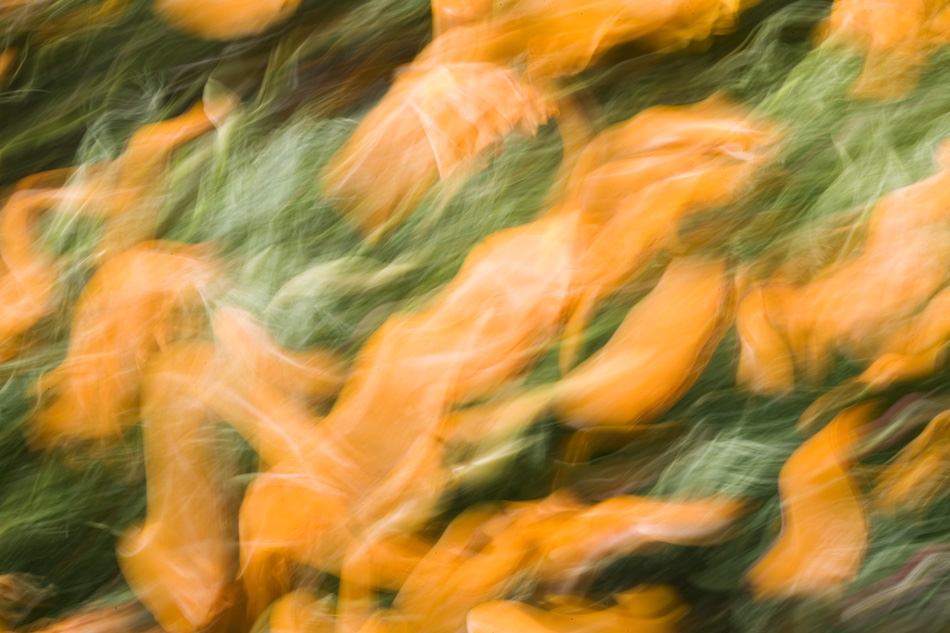 Sometimes going out with a clear mind can lead to interesting images.  Here is a recent photograph taken during a day trip along the Sunset Cliffs in San Diego. 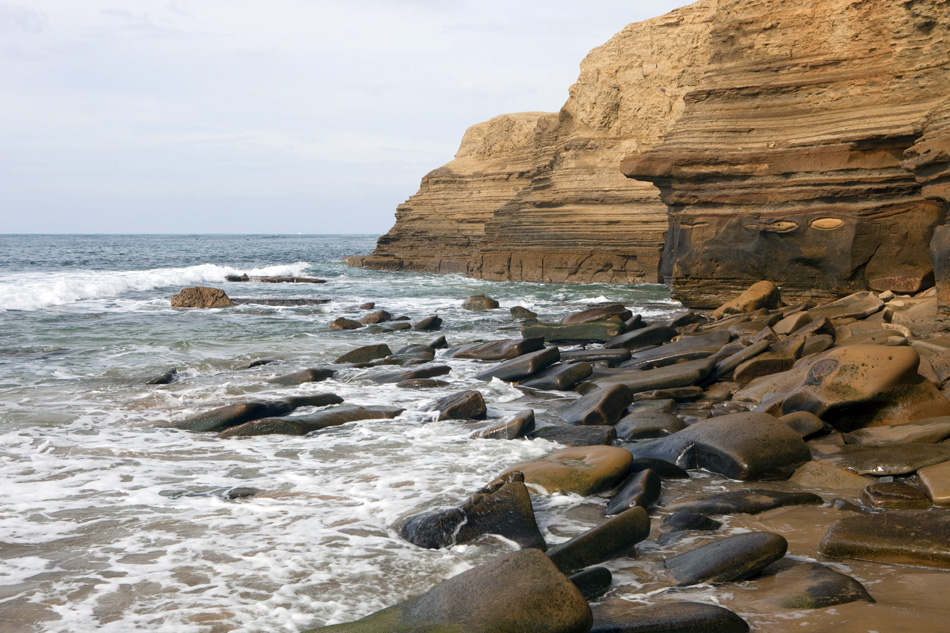 As you can see this image isn’t exactly a work of art, instead it looks like your typical mid-day coastal scene.  However, after taking this shot I remembered I had a 8 stop neutral density filter in my camera bag.  Since I didn’t know when I would be coming back here (hopefully for a sunset shot), I put the filter on and added a little pizazz to the scene. 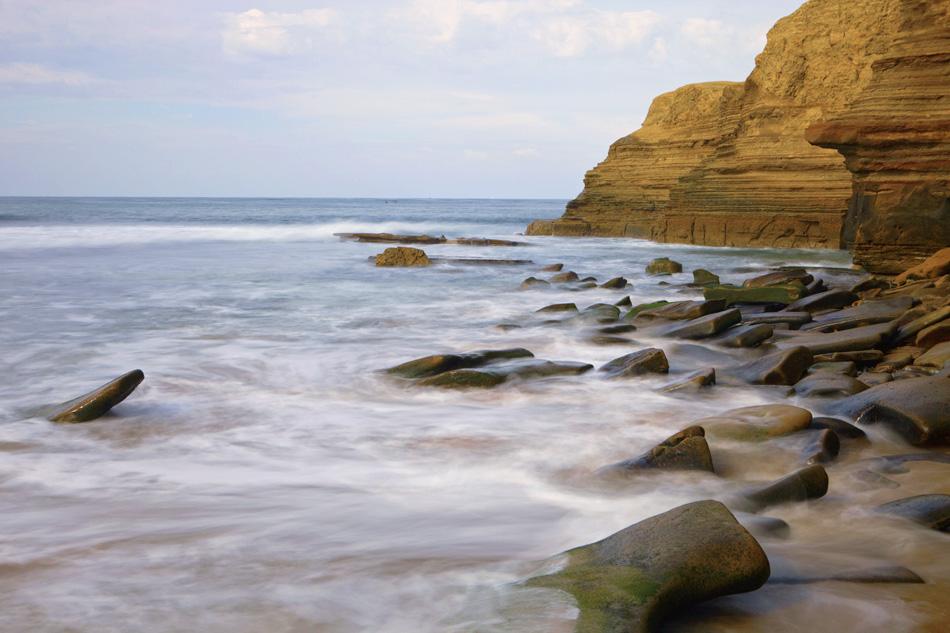 The slower shutter made for a more interesting scene, and I had fun experimenting with it.  Just by adding a filter I was able to rejuvenate my creative impulses and create a decent image.

An outdoor photographer will always have difficult days.  It comes with the territory.  I do hope, however, that these examples illustrate how these “bad” conditions can be turned into opportunities.  It just takes changing your expectations.

This entry was posted in Articles.